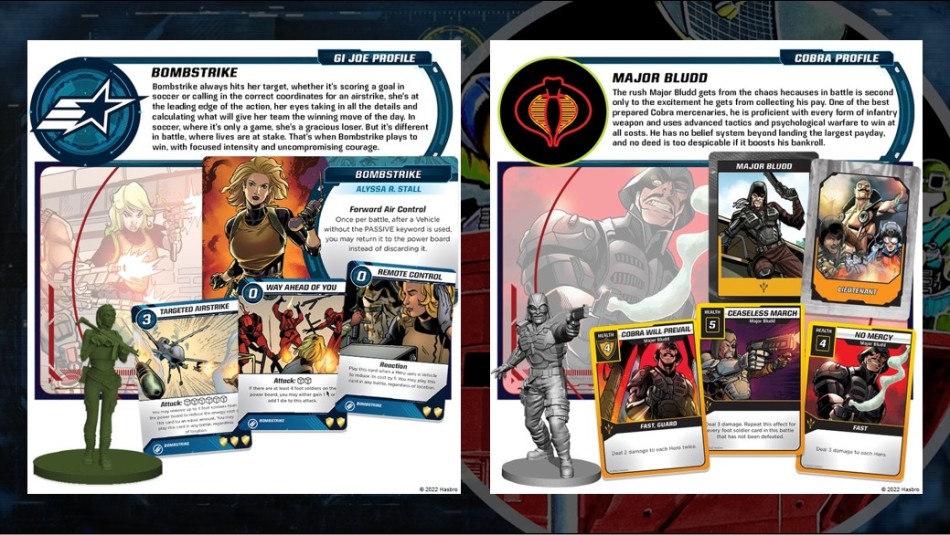 The G.I. JOE Mission Critical team is kicking off the weekend with an update via their Kickstarter campaign that brings us the scoop on two more characters!

Those characters? Oh, just Bombstrike and Major Bludd! Check it out –

It’s almost the weekend, but before we send you off, we wanted to pop in with two new intel files for you to ponder!

Featured in the Heavy Firepower expansion available in this campaign, Bombstrike is always a BLAST to play! She specializes in calling in heavy fire support, with an ability that allows the Joes to re-use a vehicle in battle. She also has a very helpful ability on some of her cards allowing her to play them into any battle, regardless of her location! Remote Control and Targeted Airstrike help her tilt the battle in the Joe’s favor from anywhere on the board.

Major Bludd will do anything for a paycheck, and he specializes in using every trick in the book to bring the pain to the Joe team. With his quick draw, cards like Cobra Will Prevail and No Mercy are going to make you hope your defenses are ready!

What is your favorite G.I. JOE story?! Let us know in the comments!

Don’t forget to help us recruit! Please share the link to the campaign on your social media!

We’ll be back on Monday with more intel! Have a great weekend!

Thanks for your support, you’re the bomb!