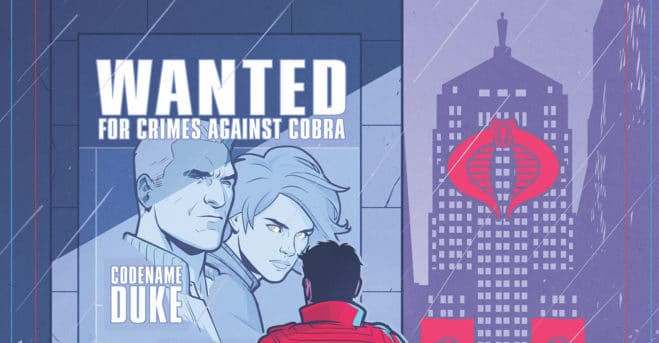 Heads Up! IDW Publishing has shared word on a new G.I.Joe title coming our way this coming September! By the looks of things, it’s going to be all sorts of awesome. Here’s the official word from IDW –

Make no mistake: There will be dire consequences for the weak-minded fools who fall under G.I. Joe’s sway and disobey the Cobra World Order!

Our vigilant Tele-Vipers have intercepted two communications from the revolutionary named Paul Allor:

“This story is inspired both by modern warfare – where non-state actors fight vastly overpowered militaries to a perpetual standstill – and World War II, where Great Britain’s SOE recruited civilians behind enemy lines.”

“Old-school G.I. Joe fans will absolutely love it and find it true to everything G.I. Joe stands for, and new folks will be attracted to a deeply character-driven tale of hope and humanity, and about the power of resilience in an increasingly unraveling world.”

Citizens, you are reminded: Cobra demands total loyalty and allegiance. Independent thought and personal freedoms must be sacrificed to preserve the magnificent society granted to you through Cobra’s magnanimous graces.

INSTRUCTIONS FOR COBRA OPERATIVES: Our intelligence officers indicate that copies of the subversive G.I. Joecomic book may be dispersed at local comic shops beginning in September. It is your duty to seek out cover variants from Chris Evenhuis, Dustin Weaver, and Eleanora Carlini, and collect these copies to prevent them from falling into enemy hands. Visit www.comicshoplocator.com to find a store near you. OBEY COBRA!

I don’t know about you, but I’m all over this once it drops this fall!