Mr. Solomon Witt of Sunok Studios, LLC has shown no signs of slowing down, as the Hell Screamerz Facebook Group has been ON FIRE with new images of upcoming offerings!

This past Sunday, we got to check out a few different items. First up, the Hell Screamerz: (Series 1.5) Siege/ Eternal Series! 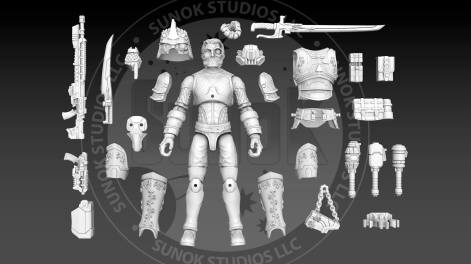 Check out the amount of gear included with the next series! The regal appearance of this new Eternal series is surely going to be a hit with collectors.
Speaking of hit, next up, we get to feast our eyes on the Harvester!

This new Modular weapons system can be used for both larger Eternal figures as well as smaller infantry. You can even shoulder mount the Harvester, allowing you to make your units unique to your style of combat.
The Staff can be shortened for smaller hand held weapons, or swapped for double edged death dealing! The option is yours!
Finally, earlier today, we were treated to test paint samples, highlighting the Pantone Colors that we can expect to see soon. Check it out –

As shown above, the test painting Process has begun. Color matching can be tedious; Using Pantone color sheets does not always translate well from paper to plastic but Solomon notes that the paint master team at the factory have it almost dead on to what he wanted (after a little re-paint takes), but he thinks we are set to go to start the color stage of things!
I’m beyond excited for the day when Hell Screamerz finally invades our mail boxes! Until then though, I’ll be sure to keep you posted on any new intel as it’s received.